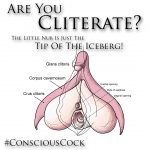 Most people don’t know as much as they should about female anatomy. The clitoris is horribly misunderstood and is touched incorrectly by most men. Ladies & Gentlemen: increase your cliteracy!!!

Much bigger than you think

The first thing to understand is that the clitoris is not just the little nub. It is a vast and beautiful design that fills a hug area all around her vagina. As she gets turned on, it swells in size and becomes more responsive and sensitive throughout all of its parts.

Where are the bulbs?

The bulbs are on each side of the vagina, and as she gets turned on they swell up and get sensitive. They are erectile tissue, just like your penis, and the blood flow makes them engorged when she’s really turned on. You can massage them through the vaginal wall on the left & right sides, and it feels really good to her when she’s totally hot. But you have to get her hot first. Otherwise it’d be like her rubbing your limp flaccid penis…not very much pleasure. But once it’s full of blood & engorged, then it feels really good, right!

A great way to think about it is like it’s a flower that you have to water and care for until it unfolds its petals. Then it is beautiful, radiant, and smells lovely. Water her with adoration, light, seductive gentle touch and caresses until she unfolds. As she becomes more aroused you’ll be able to touch deeper with firmer pressure and increasing rhythm. Think of bringing water to a boil slowly but surely.

Increase your cliteracy and it’ll empower your sex life and she’ll love your attention and the respect that you show her for how she feels.